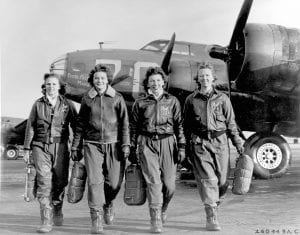 These four female pilots leaving their ship at the four engine school at Lockbourne are members of a group of WASPS who have been trained to ferry the B-17 Flying Fortresses. (U.S. Air Force photo)

Last night I was searching for something interesting for us to watch on television when I ran across a documentary about the Women’s Air Force Service Pilots, WASP’S, of WWII. I already had a little knowledge and experience about this courageous group of women. When I was in high school my parents had a friend named Harriet who was a WASP in WWII. She would often share her experiences and life story with us, which always fascinated me and left me in awe. She spoke little about her treatment as a WASP and more about her pride in serving her country in the war effort. I was captivated by her commitment to service and her desire to serve her nation. She truly was dedicated to building a strong powerful pride in one’s self and one’s nation. She seemed interested in me, as she knew I had a desire to enlist in the service. I can remember overhearing a story (which I think was not meant for me to hear) about her losing both of her sons to the war effort in Europe. At the time I remember thinking how devastating that must be but now, as an adult and having children of my own, I cannot even imagine the loss of both of my sons to war. It gives one perspective on the passion and commitment that prevailed in that era. At the time I did not realize the sacrifices these women made and the trials and tribulations they endured while serving our country. Here is a website to visit which will shed more light on what these women endured and how they were denied by the nation they served so valiantly. http://www.afhso.af.mil/topics/factsheets/factsheet_print.asp?fsID=15244&page=1

What left me in despair after watching and doing a little research about the WASP’S was the treatment they received during and after their abandonment by our military. I too have a memory along these lines! It was in 1966 when I was returning home from Viet Nam where I served in the Marines. I have a vivid memory of landing at El Toro, Ca. Marine Corp Air Station. We had loaded on C-130 cargo transport planes from Da Nang and landed in Kadena, Okinawa at the Air Force Base. We were then loaded on a Braniff Airlines Jet and head back home. There are no words to describe the relief, joy, and honor felt when leaving a war zone. It is also a double-edge sword because as you have these feelings of relief, you are also aware you are leaving fellow Marines and other relationships you have established behind. There is a feeling of a job left undone and not yet completed! Lots of emotions are flying around in your mind but the knowledge that you made it out are beyond description.

Everyone onboard of the aircraft anxiously anticipated our arrival 18 hours later at El Toro. We envisioned throngs of cheering crowds welcoming us home, young girls throwing themselves at our feet, greeting us like heroes! Remember that most of us had not had a peaceful nights rest for many, many months. We really had not received much accurate information from home for at least a year and a half. The talk on the aircraft was enthusiastic and full of anticipation beyond anything I had ever expected. The stewardesses on the flight were a sight to behold. They were three of the most gorgeous blond Texas girls I had ever laid eyes on. I know because I, along with everyone else, made it a point to introduce myself and learn all I could about them. This could not have been an easy job for these women. Just imagine 130 Marines, 3 Blondes, and a confined space!! We savored their smiles, scents and conversations since they were the first American women we had seen since leaving home. After the long flight and a refueling stop in Anchorage, Alaska, we started our approach into El Toro. The anticipation grew as we descended to the airstrip and we cheered as we landed. As we approached the hanger we looked out of the windows of the aircraft where we saw 3 Marines in fatigues and No Cheering Crowds.

A fellow Marine made the comment “they must be waiting for us in the hanger”. We disembarked from the aircraft to howling sergeants ordering us to attention and to form 3 rows to prepare to pick up our duffle bags. We obeyed orders, as Marines always do, and proceeded to march to the front of the hanger where we were ordered to dump our belongings in a bin for inspection. Anything we had from Viet Nam was to be discarded and prepared for destruction. Some of the men brought things that they surely should have been left behind, but some of us had photos and memorabilia we treasured and wanted to keep. I had many photos of Youn, the little girl from the orphanage that I had mentored, all gone never to be never to be retrieved, lost forever except in my memories. We were then given our orders for our next duty station, marched out to the front gate and dismissed! That was it. We were home. No fanfare, no hoopla, all we got was a kick in the ass and get out of the gate! I can remember us talking at the main gate of El Toro waiting on taxis to transport us to LAX or buses to take us to our next destinations. Wow we thought, is this it? And sure enough that was, our tours of duty in Viet Nam concluded by being abandoned at the front gate of El Toro Air Facility to fend for ourselves, alone and forgotten, not even a welcome from a Marine Officer! We were stunned and many Viet Nam vets have never gotten over it.

So you see when I empathize with the WASP’s I do it with a sense of deep understanding. WWII was a much greater threat and intense war than Viet Nam, but the feelings of abandonment are the same. I can only imagine the how they felt being told that they weren’t needed or wanted anymore, no military recognition, no benefits, kicked to the gate and not even given a fare to get home. They were discarded like they never mattered one bit. How horrible is that? Discrimination at it worst! Who perpetrated this treatment of the WASP’s? Our government and military did this to these women. These ladies didn’t complain as they went about their lives, that what solder’s do!

When our Solders, Air Force, Sailors, and Marines come home now in most cases they are greeted with respect and a caring population. It brings joy to the heart knowing your service is appreciated. I guess we have learned and come a long way from the days of the WASP’S. Most of these women are now in their late 80’s and early 90’s and I’d like to give respect and tribute to them by saying, “ Thank You Ladies for your unselfish contribution and service to our country.”