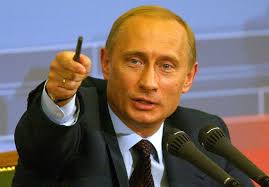 This past week Vladimir Putin, the president of Russia, crafted a statement that revealed one of the theories I have recently developed. In my soon to be released book, Expectation Therapy, I explain this theory called “Collective Diminished Expectations”.

The basic premise of collective diminished expectations is that over time governments, religions, and other organizations that aim to control a mass of people, make subliminal statements that diminish the expectations of these groups. Over time they gain control of these people because they begin to expect less and less of themselves. This covert tactic has been used since the beginning of time to gain control over unsuspecting followers.

It is not by chance that president Putin made this statement, “It is extremely dangerous to encourage people to see themselves as exceptional, whatever the motivation”. This statement is probably the most covert use of collective diminished expectations that I have personally seen. Putin went on to say, “We are all different, but when we ask for the Lord’s blessings, we must not forget that God created us equal”. Are you kidding me??? This coming from the man that has lead the KGB and the Russian government to suppress so many people? Another glaring example of the Russian suppression is concerning gays and their rights in the Russian Federation!

The point that I want to instill is that through collective diminished expectations, many governments and leaders, over time, have gained influence that is far reaching in world affairs. Hitler used it to massacre the Jews, the United States Government used it to eradicate the Indian population, the Confederacy used it to enslave an entire race, and the list goes on and on. How much more dangerous can a simple statement be? It is the entrance to the idea that we should not think that we could be exceptional, which is in direct opposition of our core belief that we have unlimited capabilities and opportunities if we choose to use them.

If you understand Putin’s background as an operative in the KGB then it makes sense that he would want the American people to think that they should not think of themselves as having the capability to be exceptional in any form. He planted the seed of doubt and it becomes extremely important that we as citizens of this world do not water that seed. If we do, we are all in danger of collective diminished expectations taking root in an all ready diminished world. I’m with Senator Robert Menendez when he commented that he wanted to vomit when he heard Putin’s statements.

So with that being said, I hear by declare Putin guilty of spreading the crime of BRAINWASHING on the minds of the world’s people. Guilty as charged Vladimir Putin!