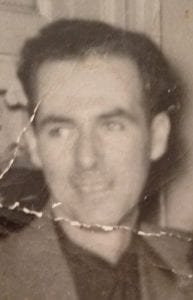 Ever since I can remember I have sought and desired my Dad’s love and approval. First I will give you a little history about my Dad. He was born and raised in Brooklyn, NY into a large Irish Catholic family. His father died when he was quite young. They were a devoted and passionate unionized family of printers and newspapermen. Raised by my grandmother, they were a closely-knit, funny, loving, hilarious bunch that enjoyed their beer and baseball to an extreme. My father was different when he was not around his mother, brother, and sister. He became quiet, very stoic and introverted when he was around them. All I can figure is that he found so much solace in his mother & siblings that he let his inhibitions go, much like he did when he imbibed in the consumption of beer. When my father drank, he was hilarious beyond comprehension. He met my mother sometime in the late 1930’s and they married in Teaneck, NJ. He served in the Army during WWII and at the end of the war they set up residence in Teaneck with my Mom & brother living with my mother’s parents. On Aug 26, 1947 I entered the picture and this is where my story with my Dad starts. My early recollections of Dad are fond and memorable as baseball was the bond we had. I can remember playing in the backyard with him and my uncles as they taught me to throw, bat, catch, and all the intricacies of the game. Oh yes, teaching me to love the Dodgers and driving into my mind the faithfulness to them, which still lies deep within me and will always be a part of me. Those were the days! We moved several times around New Jersey but always remained close with Dad’s brothers, sisters, and their families. I always loved having the attention of my uncles and aunts. I grew up continuing to play baseball every chance I could get. My father was busy working and doing dad things I guess, but I cannot remember him ever coming to see me play ball. His brothers lived in NY and we were in Jersey so they could not make it either. I can always remember every game looking and watching for him to come see me like the other dads did with their sons. He never saw me play even when I played semi–pro ball. When I was eight, we moved to upstate New York on a farm that was isolated and run down. My Dad became gravely ill upon arrival. I will never forget it! He was cramping and vomiting like I had never seen before. He thought he had food poisoning but after several days of refusing to go to the hospital we loaded him in the car and went to the VA hospital. The doctors there said it was none too soon, as he was septic, had a perforated ulcer and was near death; yes he was a stubborn Irishman. He recovered and we resumed life but it was different than before. Dad couldn’t find work around the farm and had to move to Rochester to work at the paper while we stayed at the farm. I have always focused on my loneliness and abandonment on the farm but as I have grown and learned I now realize and think about what it must have been like for him. He too was torn away from his family and all that he knew, alone in a new place, no friends, having to start over. I wish I could have been more understanding so I could have been more supportive of him. We just grew further apart as the years progressed. After I joined the Marines and went to Viet Nam in 1965 my Mom and sister moved to the city to be with Dad, they were family again. I think it was good for everyone to have that feeling of family back. The years passed and my sister had a son, Gary. Oh, how my father took to that boy and that boy took to my Dad! It was love at first sight and it lasted until my Dad’s final days. I was so happy for them both. Their relationship was a match made in heaven, they really needed each other. Watching them together and looking back from afar I have come to the conclusion that my father learned from the mistakes of my youth and was determined to not let it happen with Gary. Dad for that I am so proud of you. I remained distant in miles and spirit over the years and for that I hope you forgive me. We never spoke much about our feelings to each other; I know it was hard for you. I told you I loved you many times in our phone calls, but I never got up the nerve when we saw each other to wrap my arms around you, put my head on your shoulder and whisper in your ear, I love you, Dad. I do and always will. I thank you for all you did to make me the man I am today. Dad, do you what to play catch? Happy Fathers Day Your Son