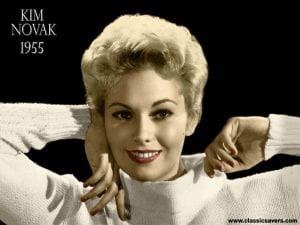 I am the world’s biggest supporter of individual choice! I whole-heartedly believe God gave us the power to pick and choose the paths we follow in life. We are also responsible for those choices we make, not to point fingers, lay blame on others and to the importance of taking ownership of our choices. This being stated I found myself heartbroken when I saw the images of my youthful love, Kim Novak, on the Academy Awards show. I have vivid memories of her from my youth. I thought she was the most beautiful woman I’d ever seen, just inching out my other loves Sandra Dee, Marilyn Monroe, Jane Mansfield, and a sundry of other 1950’s beauties.

This got me to thinking about all the plastic surgery being done to alter the appearance of not only women but also men in our society. I started doing some cursory research on Body Dysmorphic Syndrome to see if there was any pertinent information that might shed light on the reasoning behind all these alterations.
What I found was very intriguing to me as I thought it would lead heavily into the world of entertainment when in reality most of the research leads to the world of athletics and bodybuilding. This does make sense to me since this phenomenon has been around longer in the realm of bodybuilding.

Body Dysmorphic Disorder is a mental disorder characterized by a preoccupation with a defect in the person’s physical appearance. The defect is either imagined, or, if a slight physical anomaly is present, the individual’s concern is markedly excessive. The preoccupation must cause significant distress or impairment in social, occupational, or other important areas of functioning.
Specific Symptoms of Body Dysmorphic Disorder
• Preoccupation with an imagined defect in appearance. If a slight physical anomaly is present, the person’s concern is markedly excessive.
• The preoccupation causes clinically significant distress or impairment in social, occupational, or other important areas of functioning.
• The preoccupation is accounted for by another mental disorder (e.g., dissatisfaction with body shape and size in Anorexia Nervosa).
With that in my mind’s eye I got to thinking why would so many people invest, spend, or even accumulate debt to change their appearance so drastically. I understand in film industry appearance is pretty much the whole ball of wax and appearance has a huge effect on your earning capacity. In the bodybuilding world it’s not the use of surgery to alter ones appearance but genuine hard work and dedication to your craft most of the time, though breast augmentation abounds in the trade also.
What the two occupations have in common is the mental aspect of appearance and perception of one’s facial and/or body image. What intrigues me most is the driving force behind the mental decision to make the alterations to one’s image. Is it them in their own mind or is it an agent, handler, or family member that drives them to make the decision to change their appearance. I think that it can be a multitude of reasons that reinforce the decision but the choice is the individuals in the end.
Faith or the lack of it has a great deal to do with this issue as I see it. Faith creates a confidence like no other. It drives the mechanism in the brain that assures us that all will be fine just as it was meant to be. Again, I would like to reiterate that faith comes in many forms and it’s up to us to decide how our faith will materialize. It just so happens that my faith is based in a belief in an Almighty God and I understand that is my choice and someone else may see it differently. When we look in the mirror we have to like what we see or our self-perception will get distorted and that is when our mind’s images can play tricks on us. We start to ask others for reinforcement of what we think we see. If we get that reinforcement from someone that doesn’t have our best interest in mind it can lead us down the path to augmentation that is not in our best interest. How many times do we see those huge lips on a face that looked perfectly portioned before the surgery? Why do the plastic surgeons perform these heinous surgeries? Can they really look at these individuals and say I’m really proud of that work I did on them? I suspect it has a lot to do with dollars and cents.
In all professions now days there are a few that can paint a distorted view for the many. There are some great plastic surgeons that do incredible work for the community. There are many doctors who not only perform great surgeries but also donate their services for no fee at all. Patents that are disfigured in fire, wrecks and birth defects among many other causes receive care that is the finest in the world. To these unselfish doctors we owe our gratitude and respect. They far out number the few that are mentioned previously.
We have become so consumed with outward appearances that we will go to any end to achieve the “perfect look or body” when in the end we already have the perfect look and appearance that God intended us to have. Money cannot buy self-esteem or a better self-awareness, which only comes from your faith in your inner being. You can spend a fortune trying to have that perfect look or you can have faith in yourself and accept what faith brings, the comfort in knowing that you are just what God planned you to be. Beautiful inside and out.